The Difference Between Traditional and Simplified Chinese 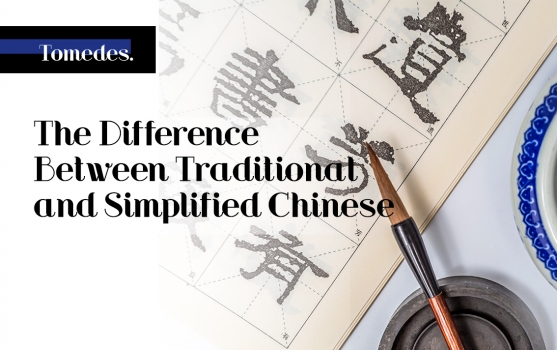 Would your business benefit from access to China’s 1.4 billion citizens? Are you planning on branching out and promoting your goods and services there? If so, there’s plenty that you need to know, from the quirks of Chinese corporate culture to which forms of Chinese language to use.

As an experienced language service provider that has been undertaking professional Chinese translation for well over a decade, Tomedes is well placed to bring you up to speed on relevant language matters. Do you understand Chinese? No? Not a problem! We are here to take care of that for you, with Chinese translators and interpreters on hand to meet your every need.

Even if you don’t speak Chinese, and have no plans to learn, it can still be interesting to discover more about the languages of China. That’s where this article comes in! We’ve taken a look at traditional vs simplified Chinese, explaining what they are, why and how they differ and which you need to use for your Chinese translations. If you’re not sure yet whether you need traditional or simplified Chinese, don’t worry – you will be they the time you finish reading this!

What Exactly Are Traditional and Simplified Chinese?

Let’s take a look at the two different types of Chinese languages.

What Is Traditional Chinese?

‘Traditional Chinese’ is actually retronym, as up until the 1950s, it was simply ‘Chinese.’ However, the creation of a simplified version of the written language at that time required the introduction of a means of differentiation, hence the ‘traditional’ being added.

The ‘traditional’ Chinese characters are those that have been in use for the written form of the language since clerical script emerged during the Han dynasty. They have changed little since the 5th century. (For a deeper look into the world’s oldest languages, you can click the link below.)

Traditional Chinese is officially used in Taiwan, Hong Kong and Macau, as well as in China. Its characters are referred to in various ways by Chinese speakers, including ‘standard characters,’ ‘orthodox characters,’ ‘complex characters’ and ‘full Chinese characters.’

Read more: What are the world's oldest languages?

What Is Simplified Chinese?

Simplified Chinese is exactly that – a simplified version of traditional Chinese characters. The government of the People's Republic of China on Mainland China introduced this character set in the 1950s. Today, it is used in China, Malaysia and Singapore. Quite simply, many characters have fewer strokes than they used to, making them easier to learn. Some of those that were already fairly simple were left unchanged.

The introduction of simplified Chinese provided language learners not only with characters that were easier to write, but with significantly fewer of them in total. If, for example, traditional Chinese contained two or more words with the same pronunciation but with different meanings (think ‘there’, ‘their’ and ‘they’re’ for an English example of this), the simplified version would use a single character for all of the words, rather than one for each (as was the case with traditional Chinese).

Interestingly, the Chinese government remains officially committed to further simplification of the language. As part of this, a second set of simplifications was launched in 1977. However, the resulting confusion and unpopularity of the new simplifications saw the government eventually withdraw them, nearly a decade later.

The History of Simplified Chinese

It’s important to understand the whole Chinese traditional vs simplified discussion, so let’s take a moment to explore precisely why there are two types of Chinese language when it comes to the written form.

Why is there simplified and traditional Chinese? Largely because literary levels in China used to be incredibly low. When the communists took power at the end of the 1940s, China’s literacy rate was less than 20%. The party actively promoted the simplification of the language during the 1950s. Today, China’s literary rate has climbed to 95%, while among young people (those aged 15-24), that figure rises to 99.6% according to UNESCO’s Institute for Statistics.

Clearly, simplified Chinese has been a big win when it comes to literacy levels within China, but where does it leave those from overseas who want to do business with the world’s second largest country (by GDP)? In reality, when it comes to a decision around simplified vs traditional Chinese for your translations, the guiding factor will be who you are planning to connect with.

Want to get your daily dose of video instead? We've created a short video of this article just for you.

The use of traditional Chinese vs simplified Chinese is, for many, an emotive issue, with different territories sticking vehemently to one version of the other. The exception to this is in China itself, where both are commonly used.

Traditional Chinese proponents include Hong Kong, Taiwan and Macau. Educational materials and most other printed materials use traditional Chinese characters. Indeed, the use of simplified Chinese characters is even prohibited in official government documents in Taiwan, though it is legal to import and distribute publications written in simplified Chinese.

Many of those who use traditional Chinese in these territories associate the simplified characters with an erosion of their traditional culture. In both Hong Kong and Macau, this has created tensions, with the simplified Chinese that is increasingly being used to accommodate tourists and immigrants from mainland China ringing cultural alarm bells for some residents.

There are also other reasons why certain regions have stuck with traditional Chinese. The 3.8 million Chinese Americans living in the US, for example, are largely descended from those who emigrated to America prior to the introduction of simplified characters. As such, traditional Chinese tends to be used in the US.

We provided an example of this above when talking about the reduction of variant characters with the same pronunciation to a single character. This was also the case with variant characters that had identical meanings (such as ‘sofa’ and ‘settee’ in English).

Another form of simplification was the application of regular rules to certain characters. This meant the introduction of a standardised, simplified version of a particular component into all characters that contained that component.

The combined result of reducing the strokes in such a large swathe of characters with these other forms of simplification was a notable reduction in the number of words that language learners needed to master. As at June 2013, the Table of General Standard Chinese Characters consisted of 8,105 simplified and unchanged characters.

A Word on Chinese Dialects and Characters

If you’re in the market for Chinese translation services, there’s also the question of which dialect of Chinese you need. China is home to 297 living languages. The most commonly spoken of these is Mandarin, which some 70% of China’s population speak.

Cantonese is the second most spoken Chinese dialect and is an official language in both Hong Kong and Macau (alongside English in the former and Portuguese in the latter).

Both Mandarin and Cantonese can be written in both simplified and traditional Chinese characters.

Which One Should You Use and Learn?

Are you struggling with the whole traditional Chinese vs simplified Chinese question when it comes to which form of the language to use? Or even to learn? If so, don’t worry, you’re not alone! Chinese is known for being one of the hardest languages for English speakers to learn and decisions such as this make it seem even more complicated (incidentally, you can click the link below to discover the other languages that English speakers may struggle to pick up).

Really, the choice of which form of Chinese characters to use or learn will come down to a range of factors that are personal to you. If you’re looking to use Chinese in a business context then you will need to consider the territory where you plan to do business and which form of the language they use there.

How Easy Is it to Learn Simplified Chinese Vs Traditional Chinese?

The Foreign Service Institute ranks both Mandarin and Cantonese as Category V languages, meaning that they are among the hardest languages for English speakers to learn, requiring some 2,200 hours of study to achieve proficiency in speaking and reading. By way of comparison, Category I languages such as Spanish and French take as little as 575 hours to achieve the same degree of proficiency. For more on some of the easiest languages to learn, click the link below.

As such, you’ve already got quite a challenge ahead of you in terms of mastering Chinese. Should you really be making that challenge harder by learning the traditional Chinese characters instead of the simplified ones?

With two written forms of the language in everyday use, professional Chinese translation requires expertise and experience in order to deliver the perfect translation. There are plenty of opportunities for those providing Chinese translation services to translate simplified Chinese to traditional Chinese and vice versa. After all, there are plenty of publications (particularly those that are online) that want to publish high quality content in both forms of the language.

Mastery of both traditional Chinese and simplified Chinese also maximises your appeal to those in need of English to Chinese translation. Some clients will need you to translate into Chinese traditional characters while others will want simplified characters. Provide both and you should have plenty of opportunities in front of you.

Exploring Chinese in both its written and its spoken form is a fascinating topic of study. From ancient roots, contemporary Chinese retains an allure that is made only more appealing to linguists by its relative complexity. Chinese might not be easy to learn if you’re a native English speaker, but it is certainly a satisfying language to study.

Your own circumstances will dictate your reasons for using and/or learning Chinese, as well as the kind of Chinese translation services that you are likely to need. This means that opting to use traditional Chinese versus simplified Chinese might not come down to a matter of choice but to one of practicality.

Whichever you decide to learn or to use, be aware of the cultural sensitivities that relate to the acceptance of simplified Chinese in different countries and territories. The matter is not without issues and it pays to be aware of them, particularly in a business context, where causing offence could mean losing out to the competitor who did their homework better than you!

Finally, remember that the Tomedes team is always here for advice. We translate and localize documents into Chinese on a regular basis, so if you want the latest insights and guidance, we would be delighted to connect with you.