What Is the Hardest Language to Learn? 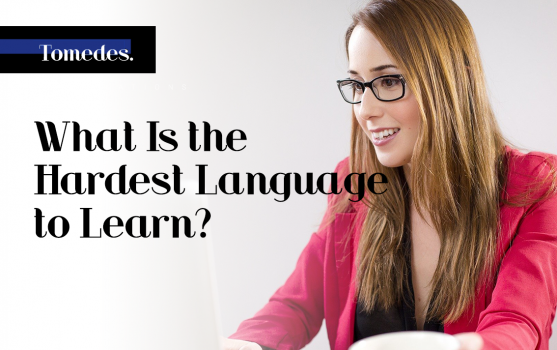 Are you planning to learn a new language? If so, how many hours do you think you will need to put in? Language learning is a pleasure to those who like a challenge that will bring them plenty of benefits. Yet within the overall field of language learning, there are vast differences in the languages themselves. Some languages are much harder to learn than others, from their tongue-twisting pronunciation to the complexity of their written script to the sheer number of words they contain.

In this article, we’re going to take a look at some of the most difficult languages to learn and consider what makes them such a challenge. Which do you think will be the hardest language to learn overall? Let’s find out!

Defining one language as the most difficult to learn in the world is a tricky concept. The difficulty of learning a language is relative to the learner’s native tongue (or tongues), as well as to any other languages that they may already have learned.

An example, for the sake of context: I’m a native English speaker who learned French, Spanish, German and Latin at school. Personally, I found Spanish to be the hardest to learn, but was that due to an inherent difficulty in the language or the fact that it was an intensive, one-year course rather than a longer period of study? Or was it simply that the Spanish teacher’s style was different from those of the other language teachers’ methods?

Later, when I learned Portuguese, I found it relatively easy. Would I have found it harder without having had that initial grounding in both Spanish and Latin? Or if English wasn’t my native tongue?

Such questions demonstrate the complexity of naming a single language as the most difficult to learn. However, they are not the only considerations. Some languages are hard to learn due to their sheer inaccessibility. If you want to learn to speak a language that has fewer than 100 speakers, such as Sarcee or Potawatomi, you’re not going to find classes at your local adult education centre or even online. Many such languages have no dictionaries and, indeed, no written form, making them very hard to access and therefore to learn, before any grammatical considerations are even considered.

Having said all of which, we do like a challenge here at Tomedes! So, let’s take a look at what could, arguably, be the hardest language to learn.

What Is the Most Difficult Language to Learn in the Sino-Tibetan Language Family?

We’ve started with the Sino-Tibetan language family, as many of these languages are particularly difficult for English speakers to get to grips with.

Is the Mandarin Language Hard to Learn?

Some of world’s oldest languages originate from China (see the link below for more on these), as well as some of the hardest to learn. Is Chinese difficult to learn? Many English speakers certainly find it tough. In fact, Mandarin is one of the trickiest languages for English speakers to pick up as a result of its tonal nature and complex script.

A lack of learning resources also used to be an issue for many would-be Mandarin speakers. However, that has changed significantly in recent years, with a vast range of resources available online for those with an interest in learning Mandarin.

In the UK, Mandarin learning is increasing rapidly. Over 3,500 pupils undertook Mandarin Chinese GCSEs in 2018 and the British Council reports that Chinese is now offered as a GCSE option by 8% of state-run schools and 32% of independently run schools.

Read more: What Are the World’s Oldest Languages?

Is Cantonese Hard to Learn?

There’s plenty of debate about whether Cantonese is a language in its own right or a dialect of Chinese. Click the link below if you want to delve further into this particular debate! Whichever you consider it to be, Cantonese poses plenty of problems for learners, including those who already speak Mandarin!

Cantonese and Mandarin share many traits when it comes to their writing systems, but the two languages are not mutually intelligible. Not only must students of Cantonese learn the meaning of thousands of logographic characters, they also need to deal with the eight tones that speakers use, using their pitch to shape the meaning of the word they are pronouncing. Mandarin, by way of comparison, uses only four tones, making Cantonese arguably the harder of the two to learn.

Is Burmese Hard for English Speakers to Learn?

Technically, these days, Burmese is known as ‘the Myanmar language’ but most English speakers still refer to it as Burmese.

In terms of learning difficulty, Burmese is an easier option for English speakers to learn than either Mandarin or Cantonese. The Foreign Services Institute (FSI) ranks it as a Category IV language, meaning that it requires around 1,100 hours of study in order to achieve general proficiency in reading and speaking. Both Mandarin and Cantonese are Category V languages (the hardest category there is), which require around 2,200 hours of study to achieve the same level of proficiency.

So why is Burmese hard to learn for English speakers? Mainly due to the lack of high-quality resources and teachers outside of Myanmar, even with the internet at one’s disposal! The fairly limited geographical spread of Burmese means limited learning opportunities. Aside from that, the Burmese script, grammar and vocabulary all pose certain challenges for native English learners.

Is the Bai Language Hard to Learn?

Another of China’s languages, Bai has over a million speakers, who speak three or four main dialects. Mainly located in Yunnan province, Bai speakers use eight tones when they talk. This can pose a problem for English speakers, just as it does when they learn Cantonese. The modal and non-modal tones can be hard to crack for those who come from a non-tonal linguistic background.

Do you want to watch a video instead? Don't worry, we've made a short video for you.

What's the Hardest Language to Learn from the Romance Language Family?

Romance languages such as Spanish, Italian, Catalan, Portuguese, French and Romanian are often considered to be some of the easiest for English speakers to pick up. The FSI ranks all six of these languages, which are descended from Latin, as Category I tongues – those that take the least time to learn, at just 575-600 hours required to achieve general proficiency.

Most learners tend to rank Romanian as the hardest Romance language to learn, but let’s take a look at some of the other contenders as well.

Is Romanian Hard to Learn?

While Romanian shares many similarities with other Romance languages, it has a number of grammatical quirks that single it out from the rest, which is why many consider it to be the hardest language to learn in that particular family.

In many ways, Romanian remains truer to its Latin roots than other Romance languages, particularly when it comes to grammar. Firstly, it is the only FSI Category I language with case inflections. It also retains the neuter gender for nouns, adding a further layer of complexity for learners.

How Hard Is Spanish to Learn?

It was not by chance that Spanish was awarded a prominent place on Tomedes’ list of the 15 best languages to learn in 2020 (you can click the link below to discover the other 14). Widely spoken across Latin America, as well as in Spain, it’s not usually a hard language for English speakers to learn, due to its relatively simple grammar and phonetic pronunciation.

Is the Portuguese Language Hard to Learn?

Those who’ve tried to learn both Portuguese and Spanish often consider the former to be the harder to learn. The reason is simple – you don’t pronounce Portuguese words as you might expect to! However, once you’ve mastered the basic rules of Portuguese pronunciation and become able to pronounce unfamiliar words with a reasonable degree of accuracy, the learning journey becomes much smoother.

Is French Difficult to Learn?

French also offers some difficulties when it comes to phonetics, as well as some grammatical issues for English speakers. Often, it is the language’s sheer number of exceptions to rules that put learners off, as well as the pronunciation!

What Is the Most Difficult Language to Learn in the Germanic Language Group?

Germanic languages include English, German, Dutch, Danish, Swedish, Icelandic, Faroese and Norwegian. Let’s take a look at which of these are the hardest to learn.

Is Icelandic Difficult to Learn?

Of all the Germanic languages, the FSI considers Icelandic the most difficult to learn, ranking it as Category IV, which requires around 1,100 of studying to achieve proficiency. With archaic vocabulary, complex grammar and tricky pronunciation, Icelandic certainly poses a challenge for the average English speaker.

Is the German Language Hard to Learn?

German is not overly complex for English speakers to learn, though the FSI ranks it as Category II (750 hours of study). It is German’s noun genders and vast array of compound words that can make it seem challenging – hence it being Category II, rather than Category I!

How Hard Is Dutch to Learn?

To the English ear, Dutch can sound like a tricky tongue to master, but it’s actually easier than one might imagine. The only part that can really trip up English speaking learners is the use of two articles (de and het) instead of English’s one.

How Difficult Is it to Learn Danish?

Like Dutch, Danish is ranked by the FSI as a Category I language, requiring 575-600 hours of study to reach proficiency. Although grammatically easy, Danish is known as the hardest of the Scandinavian languages to learn. For English speakers, the struggle lies within its speaking patterns, as well as the fact that Danish speakers speak incredibly fast!

What Are the Most Difficult Languages in the Niger-Congo Language Group?

Is Yoruba Hard to Learn?

Yoruba can be a tough challenge for English speakers to learn. The main issue lies in the fact that subtle differences in timbre, rhythm and articulation can change the meaning of commonly used words. The number of similar-sounding vowels can also be a steep learning curve for English speakers who want to learn Yoruba.

Is the Igbo Language Hard to Learn?

With multiple dialects and a range of special sounds, it’s hard even to know which form of Igbo to learn! That said, the grammar is not too difficult, thought the tone can be tricky at first, as can pronunciation.

Is Fula Difficult to Learn?

In some ways, Fula is easier to learn than other Niger–Congo languages due to its lack of tones. However, what the language lacks in tones, it makes up for in noun classes. Fula dialects commonly have between 24 and 26 noun classes, each of which uses a different suffix to modify the meaning of a root word. Cue plenty of hours of study for English speaking Fula learners!

Is Swahili Tricky to Learn?

Many people consider Swahili to be the easiest African language to learn. It’s not tonal and words are read phonetically, although the particles used at the beginning of words to represent tenses can trip many learners up at first.

Learning a difficult language can be immensely satisfying. It can connect you with new people and help you to understand different cultures. It can also be frustrating at times. Stick with it though and you will prevail!