Localizing for the Mexican Market

Would you like to access a huge (and growing) marketplace for your goods and services? If so, it’s time to say ‘hola’ to Mexico!

Of course, connecting commercially with Mexicans is about far more than just Spanish translation. As such, we’ll run you through all you need to know about localizing for the Mexican market. Ready? Then let’s dive in and take a closer look at Mexico.

Getting to Know Mexico

Mexico is the world’s tenth largest country by population size and the 14th largest by land mass. It is home to some 128.9 million people. That’s 1.65% of the total global population. Mexico’s population has increased by 1.06% over the past year. The country has a median age of 29, with 84% of its population living in urban areas.

Many companies have set their sights on this young, urbanised population when it comes to selling their goods and services. For English-speaking companies, that means engaging Spanish translation and localization services.

Mexico is home to the largest Spanish-speaking population of any country. It has a total of 121.9 million speakers, more than double the number in the next largest Spanish-speaking country (Colombia, with 49.44 million Spanish speakers). At the same time, Mexico has one of lowest English proficiency scores in Latin America, coming 16th out of 19 countries in 2018, according to Statista. 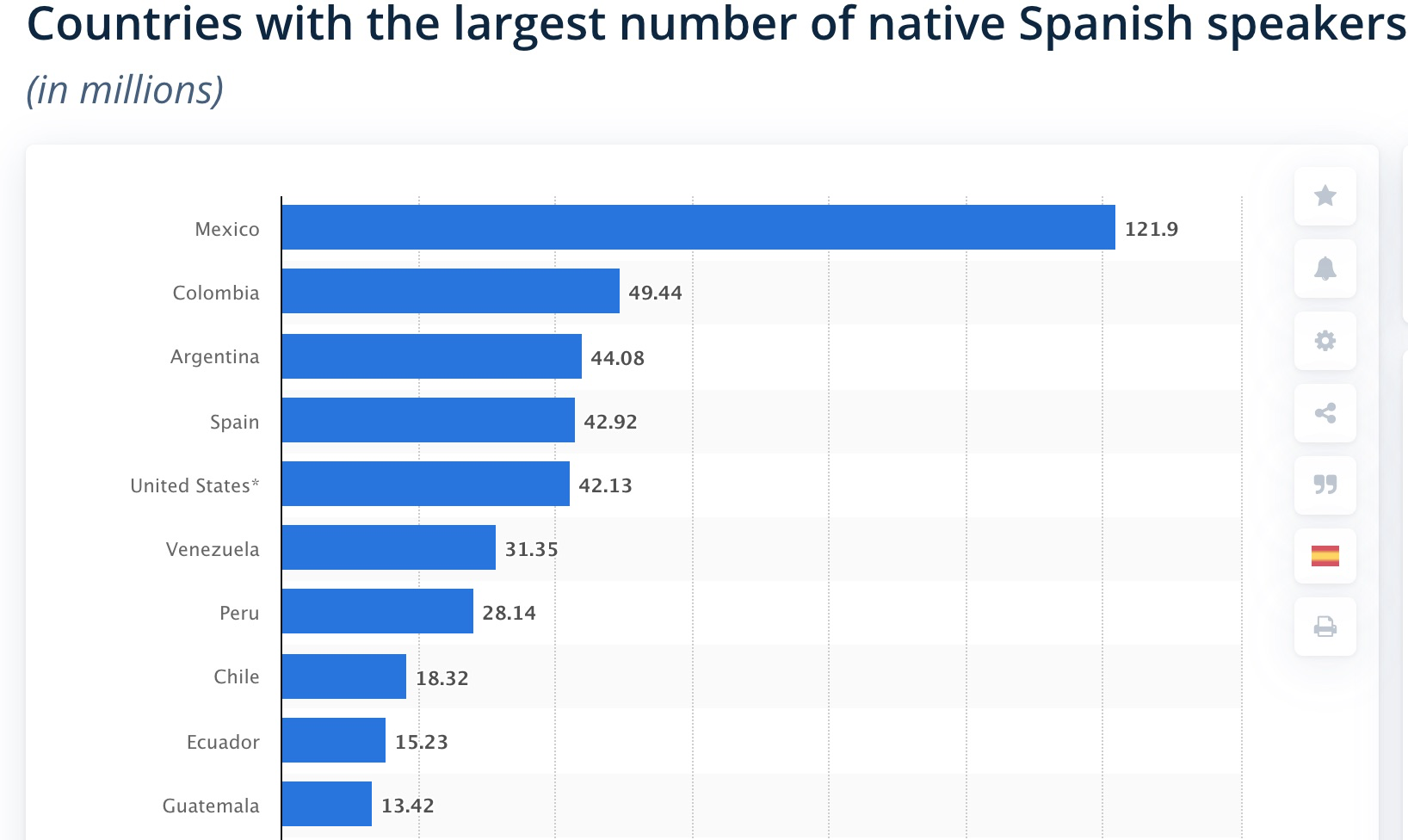 One factor that is a major draw for many companies considering tapping into the Mexican marketplace is the sharp jump in the country’s internet penetration rate in recent years. In 2014, just 44.39% of Mexicans used the internet. However, by 2018 that figure had jumped to 65.8% according to Statista. This means that online sellers have the potential to connect with a rapidly growing audience.

Why Localize for Mexico

It’s important to localize for Mexico due to the country’s vast potential. Investopedia has flagged up Mexico, along with India, Russia, Pakistan and Saudi Arabia, as a “notable” emerging market economy (for more on localizing for the Indian market, click the link below).

An emerging market economy is one that is in the process of transitioning into a developed economy. There is usually excellent potential for investors thanks to rapid growth, but also “greater exposure to some inherent risks due to their status,” according to Investopedia.

One key feature of emerging market economies such as Mexico is the higher standard of living that develops as part of the transition. And where there is greater affluence, there are more opportunities for businesses looking to court the country’s consumers.

As Mexico engages more with the global community in terms of trade and other economic ties, an increasing number of businesses are looking to get involved. With plenty of competition around, those looking to enter the Mexican marketplace need to localize their goods and services in order to stand the best possible chance of success.

Read more: Why You Need to Localize to Win Over the Indian Market

Not in the reading mood today? Keep calm and carry on watching this video.

Translating and localizing content for the Mexican marketplace is about far more than just converting your products and marketing materials into Spanish. Yes, Spanish is the most widely spoken language in Mexico, but it is far from the only language that’s used there. In fact, the Mexican government recognises 68 indigenous languages.

Many of Mexico’s indigenous languages are endangered. 130 of them have already vanished, taking with them customs and traditions that cannot now be recovered. According to Ethnologue, some 281 indigenous language variations are still spoken in Mexico today. However, National Geographic reports that 21 of those are critically endangered, while a further 122 are considered to be definitely or severely endangered of vulnerable. 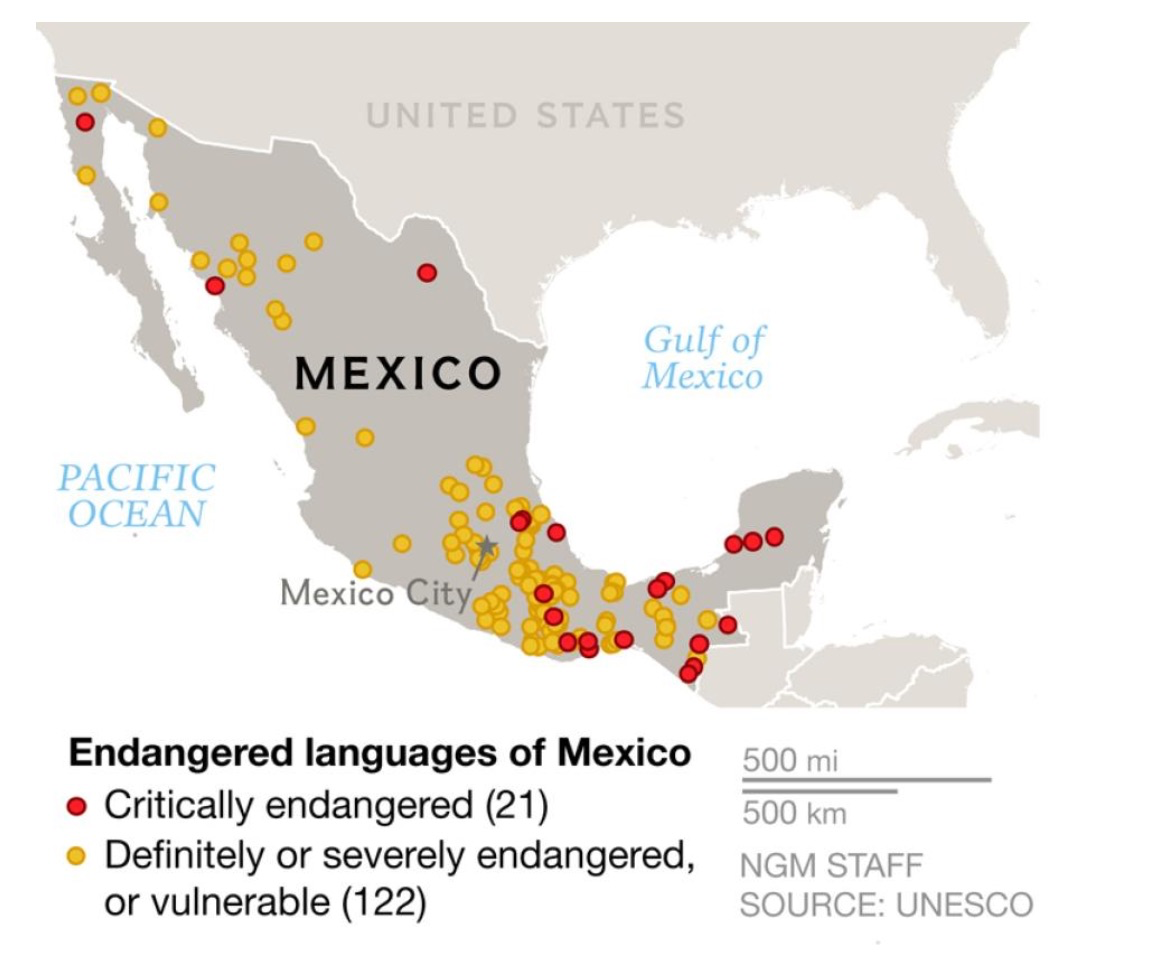 In terms of speaker numbers, Nahuatl has more speakers than any other indigenous Mexican language. Formerly known as Aztec, the language has numerous variations, with the Mexican Instituto Nacional de Lenguas Indígenas (National Institute of Indigenous Languages) recognising Nahuatl as a language group that includes 30 individual language varieties.

Spoken mainly in central Mexico, Nahuatl’s influence has spread well beyond the country’s borders. In English, the words ‘avocado,’ ‘chili,’ ‘chocolate’ and ‘tomato’ (among others) all originate from Nahuatl. 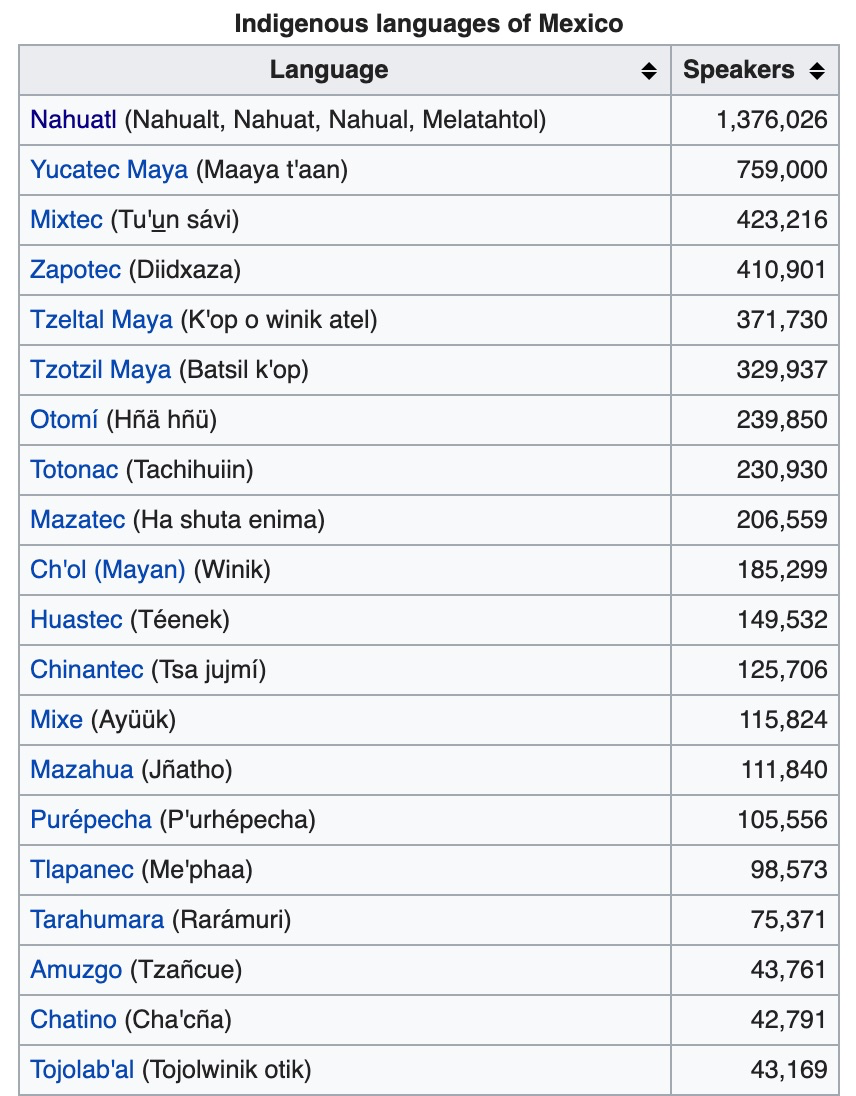 Sadly, at the other end of the scale, there are many indigenous languages where speaker numbers have dropped below 1,000. Most of these are older speakers, which doesn’t bode well for these languages’ longer-term prospects.

It was widely reported back in 2014 that the Ayapenaco has just two fluent speakers left: two elderly gentlemen who had fallen out and wouldn’t speak to each other. Thankfully, they reconciled in an attempt to save their dying tongue, but Ayapenaco is far from the only language to face such difficulties. Aguacatec, Kiliwa, Cochimí, Ixil and Kikapú all have fewer than 150 fluent speakers.

The loss of a language is about more than words. K David Harrison, co-leader of National Geographic's Enduring Voices project, describes languages as, “the primary conduit for human culture,” observing that:

“Each of the Mexican indigenous languages contains millennia of human experience, wisdom, and practical knowledge about the natural environment.”

Work is at least underway in order to preserve and protect Mexico’s linguistic heritage. The government passed the Law of Linguistic Rights in 2002 as part of a drive to keep languages alive. The law promotes bilingual and intercultural education, strengthening the commitment to indigenous language preservation that was first enshrined in the 1917 constitution.

Interestingly from a localization perspective, while just 6% of Mexicans speak an indigenous language, 20% of the population identify themselves with an indigenous ethnic group. Businesses looking to trade successfully need to bear this in mind, as one in five of their potential customers identify as indigenous Mexicans. Many of them speak Spanish, but companies’ imagery and cultural references will still need to respect this indigenous identification in order to win over as many customers as possible.

“What language do they speak in Mexico?” Ask most people this and they’ll instantly say, “Spanish.” Brought to Mexico in the 16th century, Spanish took hold in the country due to the influx of European immigrants, just as it did across much of South and Central America. As such, most modern language service providers who focus on Mexico offer English to Spanish translation services for engaging with the Mexican market.

As with all countries of such size, numerous variations and dialects of the language exist. For communication with those outside of Mexico, the central Mexican variety of Spanish tends to be used, as this is used in Mexico City, where most of Mexico’s international-facing media is located.

What is the difference between Spanish and Mexican? It’s largely down to pronunciation. In Spain, the lisping ‘th’ sound is used for a ‘c’ or ‘z’ that falls before and ‘i’ or an ‘e,’ while in Mexico the ‘s’ sounds is used. In addition, Take Lessons reports that Spanish in Spain has a more guttural sound as a result of its Arabic influences. It describes Mexican Spanish as having a “softer” sound.

Mexico has a rich and varied culture, with intertwined identities that span its indigenous peoples and the European influence that began in the 16th century. It’s a culture that often struggles to feel cohesive due to these contrasting influences, but one that has resulted in some incredible architecture, art, literature, music and more over the centuries.

One of the most globally recognised elements of Mexican culture is Mariachi music. The rattles, flutes, drums and horns of indigenous Mexican music came together with European instruments such as violins and guitars to produce the unique Mariachi vibe. Love, betrayal, death, politics, country life… all of these and more are the focus of Mariachi songs. Most Mariachi groups include violins, trumpets, guitars (including the guitarrón bass guitar and a high-pitched vihuela), while the musicians take turns to sing solo and together.

In the art world, it is Frida Kahlo who has become known as Mexico’s most celebrated artist, while in the literary world names such as Gabriel Garcia Marquez, Carlos Fuentes and Octavio Paz are known around the world.

With plenty of natural resources and a strong manufacturing industry, Mexico is the world’s 12th largest exporter. It has more free trade agreements in place than any other country, with 46 in total. 79% of Mexico’s exports went to the United States in 2018, making that country Mexico’s most important trading partner.

The Balance reports that Mexico’s top export is vehicles, followed by electrical machinery and equipment and then machinery including computers. Mineral fuels, medical apparatus, furniture, plastics, gems, precious metals and foods such as vegetables, fruits and nuts also have significant export volumes. In fact, in terms of volume, Mexico’s export of goods equals that of the rest of Latin America combined. 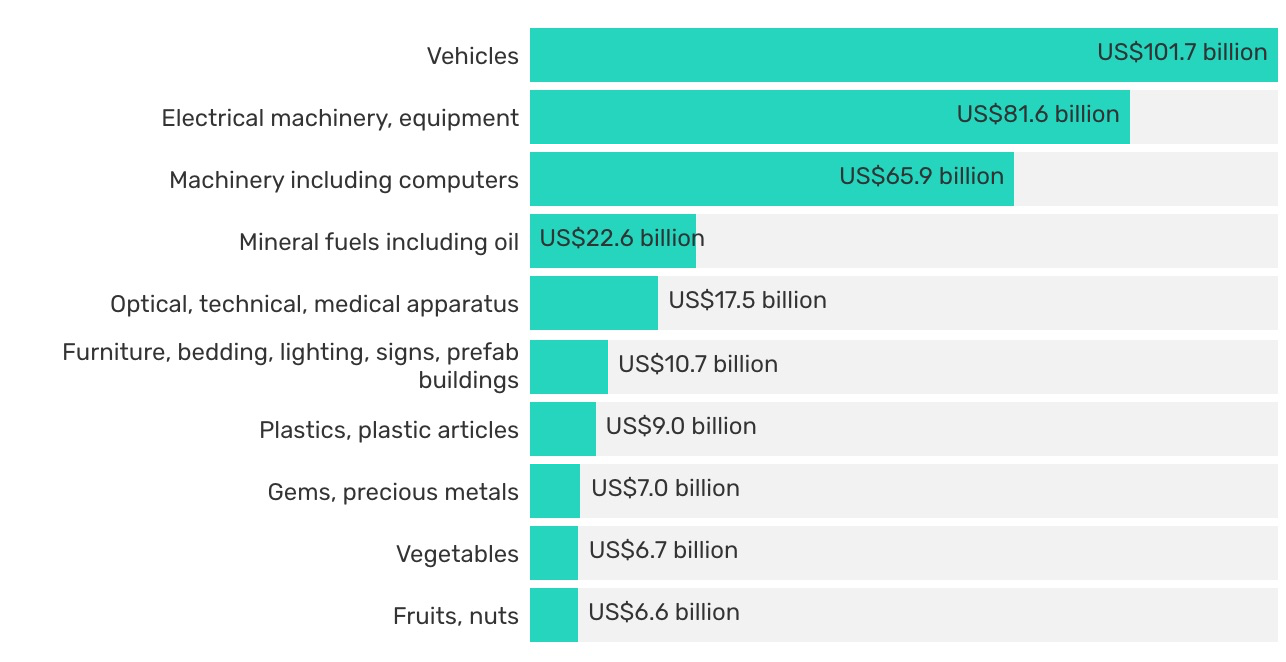 Have you heard enough to leave you eager to connect with Mexican consumers? Then let’s talk a little bit about localization for that market.

The case for localization in Mexico is clear. The country has a growing economy and a relatively young, urban population with rising standards of living. It is also a well-established global trading partner, with all the associated infrastructure.

If you’re localizing your products and services for the Mexican market, along with your website and other marketing materials, start by finding a decent translation agency with plenty of localization expertise in relation to Mexico. They will help to walk you through the localization process and ensure that you have the best chance of engaging successfully with Mexican consumers.

Next, think about the kind of customers you want to connect with. Are you releasing an app or selling farming products (or any of the myriad things in between)? Is your service a B2C service or a B2B one? These factors will affect everything from the language(s) that you use to how you present your product. Outline all of these in order to develop a clear strategy and timeline. Detail what you want to achieve, why, how and by when.

Your chosen localization agency can help with this, as they will have local experts who can furnish you with current insights into the Mexican market. These can home in on very specific areas in order to maximise your chances of success.

Remember that your translation agency can also support with market research, by undertaking translations into the languages that you plan to target in Mexico – and then translating the responses of those who have engaged in the market research process.

Finally, bear in mind that Mexico also has a growing expat population. The Balance reports that its legal foreign-born population doubled between 2000 and 2010, topping 1 million people. Three quarters of them are Americans, who have emigrated to Mexico for a lower cost of living and a better standard of life. In these instances, while translation might not be necessary, some localization work will still need to be undertaken in order to adapt marketing materials specifically to this audience.

Mexico is a vast and fascinating country that is home to significant cultural and linguistic diversity. Economic opportunities abound there, meaning that many businesses are keen to engage with Mexican consumers. Is your business one of them? If so, it’s time to work on your translation and localization strategy. Find an established, expert translation agency to support you through that process and you’ll be well on your way to building up a solid income stream from the Mexican market.