Which Languages Are Spoken in Turkey? 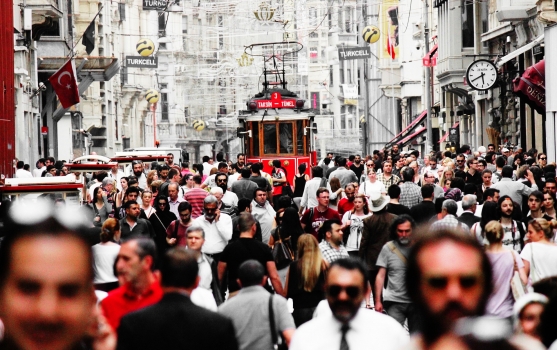 What language is spoken in Turkey? Turkish is the main language used there, with the Constitution of Turkey designating it as the country’s official language. It is spoken by 85-90% of the population as their mother tongue and is used by government, in schools, by the media and by the majority of Turkish citizens in their day-to-day life for both speech and writing.

However, while Turkish is the main language in Turkey, the country is also home to more than 30 minority, immigrant and foreign languages. The most spoken languages after Turkish are Kurdish, Zazaki and Arabic. We explore each of these, along with Turkey’s other languages, in detail below.

The Languages Spoken in Turkey

Language can be a controversial subject in Turkey. The Constitution of Turkey not only names Turkish as the country’s only official language, but its 42nd Article also explicitly prohibits any education or training institution from teaching any language that is not Turkish as a mother tongue to Turkish citizens. Elective classes in minority languages are, however, permitted.

Despite this, Turkey is home to a wide range of minority, foreign and immigrant languages. Some of these are enshrined in law as minority languages, while others (with greater numbers of speakers) remain unrecognised in official terms, largely due to the provisions of Article 42 of the Constitution.

The result of this is that many ethnic minorities in Turkey are not able to use their native language as freely as they might wish. Consider, for example, the three million of Turkey’s eight million Kurdish speakers who speak only Kurdish and the issues quickly become clear.

How many people speak Turkish? Over 66 million in total. The next most spoken language of Turkey is Kurdish, followed by Arabic and Zazaki. When broken down by the percentage of the population that speaks each tongue, Turkey’s minority and other language groups include:

According to Ethnologue, 15 of Turkey’s languages are currently endangered, while the majority are ranked as stable. Shall we take a closer look at Turkey’s linguistic diversity?

Kurmanji, also known as Northern Kurdish, is spoken by some eight million people in Turkey. It is the northern dialect of Kurdish dialect and dates back to at least the 16th century in its written form.

As mentioned above, some three million Turkish residents are monolingual Kurmanji speakers, meaning that they don’t speak the national language of Turkey. This can create issues, particularly given the country’s requirement that no education or training be provided in any language other than Turkish.

Tired of reading? We condensed this article into a short video to help you chill out.

Another of the languages of Turkey is Arabic. A minority tongue, it is spoken by around 2.4 million people there.

The Arabic spoken in Turkey breaks down into four main dialects, with speaker numbers as follows:

The majority of Turkey’s Arabic speakers also speak Turkish, with the Arab community there having undergone significant Turkification.

Zazaki – also known as Kirmanjki, Kirdki, Dimli and Zaza – is spoken by the Zazas of Eastern Turkey. It an Indo-European language that has been heavily influenced by Kurdish over the centuries, to the point that many linguists classify it as a Kurdish dialect.

Turkey is home to more than 1.7 million Zazaki speakers, who are split between Southern Zazaki (1.5 million speakers) and Northern Zazaki (184,000 speakers). Since 2012, select Turkish universities have been legally permitted to open Zaza language and literature departments. However, decades of linguistic repression have taken their toll on Zazaki in terms of overall speaker numbers in Turkey.

Also known as Judeo-Spanish, Judesmo and Sephardi, Ladino is spoken by around 13,000 people in Turkey. It is protected there by law (along with Greek and Armenian) as a result of the Treaty of Lausanne, signed in 1923. This means that the linguistic rights of the Jewish, Greek and Armenian minorities in Turkey are often given greater recognition than those of other minorities. This is despite Ladino (and Greek and Armenian) having much lower speaker numbers than languages such as Kurmanji and Arabic.

Ladino originated in Spain from an archaic form of Castilian Spanish. When Spanish Jews were expelled from the country after 1492, they took Ladino with them. Over the years it has picked up elements of Hebrew, Aramaic, Arabic, Turkish, Greek and more.

Turkey’s Greek speakers also enjoy legal protection of their communication as, while not the official language of Turkey, Greek is included in the Treaty of Lausanne.

Modern-day Turkey is home to fewer than 10,000 Greek speakers. The main dialects spoken there are Pontic Greek (5,000 speakers) and Standard Modern Greek (3600 speakers).

Another Turkish language afforded legal protection thanks to the Treaty of Lausanne is Armenian. Turkey is home to 61,000 Armenian speakers, though numbers are dwindling.

Armenian is very much an Istanbul language in Turkey, as the vast majority of its speakers – around 50,000 of them – live in and around the city (which is Turkey’s largest city and home to a total of 15 million residents).

For many years, the Armenian language and identity was largely hidden within what is now the Republic of Turkey. This was prompted by the ethnic cleansing of World War I, when 1.5 million Armenians were killed or displaced.

The Armenian language remained something of an underground tongue for many years in Turkey. Indeed, when President Recep Tayyip Erdoğan tweeted in Armenian in an attempt to curry favour from the Armenian community in Istanbul in the run-up to the 2019 mayoral elections, few were more surprised than the community themselves.

A non-indigenous language of Turkey, Kabardian has around a million speakers living there. Also known as Kabardino-Cherkess or East Circassian, Kabardian is a Northwest Caucasian language that stands out due to its clear phonemic distinction between ejective affricates and ejective fricatives – something which very few languages possess.

The Official Language of Turkey

Over the years, the Tomedes team has poured many hours into providing Turkish to English translation services. As such, we are familiar with the language spoken in Turkey and the particular requirements that relate to translating it.

While Modern Standard Turkish is based on the Istanbul dialect of Anatolia, there are a number of other dialects spoken within Turkey. These fall under the umbrellas of Western dialects and Eastern ones. This division is why we work so hard to maintain a network of translation professionals that is as broad as possible, so that we always have the right translator to hand to work with a specific dialect.

Turkish is the most widely spoken of the 35 or so documented tongues that make up the Turkic group of languages. According to the Foreign Service Institute, it is a Category IV language, which means that it has significant linguistic and/or cultural differences to English. English speakers learning Turkish should need to complete around 1,100 hours of study to achieve proficiency.

Ottoman Turkish was the language of both administration and literature across the Ottoman Empire. When the Republic of Turkey was founded in 1923, it became the country’s sole official language. Five years later, a Latin alphabet replaced the former Ottoman Turkish alphabet as part of Atatürk's Reforms.

Turkey is home to seven regions, four of them costal and three inner regions. These include the:

Each of these Turkish regions is unique in terms of its landform, climate, vegetation and, of course, its languages and dialects. For more on the differences between a language and a dialect, click the link below. Alternatively, let’s take a look at what language is spoken in Turkey’s regions.

The only one of Turkey’s regions where more people live in rural areas than urban locales, the Black Sea Region is home to some 8.4 million people.

What do Turkish people speak in the Black Sea Region? Turkish, mainly, but also Laz, which has around 20,000 native speakers. The region is also home to Armenian and Pontic Greek speakers, though many of the latter have left over the years, bound mainly for Greece.

Home to Istanbul and its surroundings, the Marmara Region is something of a linguistic melting pot, where many of the languages spoken in Turkey are to be found.

Turkey’s official language, Turkish, is of course the most widely spoken language, but the Marmara Region is also home to Greek, Armenian, Ladino, Arabic, Bulgarian, Venetian Italian, Albanian, Romanian, Georgian, Laz, Aramaic, Persian and more. Many of the 17% of Turkey’s population who speak English as a second language are also located in this region.

Turkish is again the most spoken native in this region. However, English is also spoken by many of those working in the tourism industry in the Aegean Region, along with German (to a lesser extent).

As well as Turkish, one of the main languages spoken in Turkey when it comes to the Mediterranean Region is Arabic.

Home to Turkey’s second largest city and national capital, Ankara, the Central Anantolia Region is largely Turkish speaking – to the point that English-speaking students taking courses there have reported being caught out by their inability to communicate effectively, after wrongly assuming that English could be used as a lingua franca in the Turkish capital!

As well as the Turkish official language, the Eastern Anatolia Region is home to Kurmanji, Zazaki and Arabic speakers.

In the Southeastern Anatolia Region, there are sizeable communities of Kurmanji and Arabic speakers, as well as the majority of residents speaking Turkish.

Which Language Should You Speak if You Were to Visit?

If you’re planning a trip to Turkey, it’s common courtesy to learn some basics of the language first. Opt for Turkey’s main language, Turkish, and your attempts to speak it should be appreciated across the country.

In more touristy regions, you may well be able to get by using only English, though an attempt to speak a few words of Turkish will of course stand you in good stead.

What language do they speak in Turkey? Turkish! This is the main language in Turkey and the language that you will need to use if you plan to visit or do business in the country.

Turkey’s official languages can be considered to include the three minority tongues protected by the Treaty of Lausanne (Ladino, Greek and Armenian), but the sole Turkish national language is Turkish.

Turkey’s demographics mean that several other languages used there have a million or more speakers, including Kurmanji, Arabic, Zaziki and Kabardian.