Coronavirus Crisis Handling Around the World 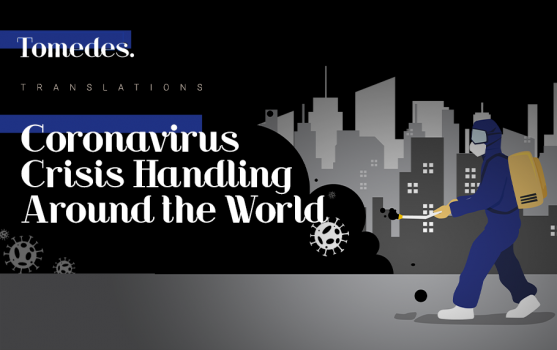 Which countries have well-handled and contained the coronavirus crisis? And what do they all have in common?

Whether you translate, interpret, localize or work in the language industry in any other way to make your living, the current coronavirus pandemic has no doubt had an impact on your daily life. Everyone needs to be informed about the coronavirus crisis, including our audience. As such, we wanted to take a look at just how different countries are succeeding in tackling the crisis.

These are just two of the questions that people around the world are asking right now as the coronavirus crisis continues to grow. What is the coronavirus disease? It’s a virus that affects the lungs and airways, causing a dry cough, fever and breathing difficulties. At the time of writing, half of humanity is under lockdown as a result of attempts to slow the infection rate of the novel coronavirus.

Yet COVID-19’s progress around the globe has resulted in some stark differences in outcomes from country to country. To explore why that might be, we’ve taken a look at some of the countries that are handling the crisis best, including what those countries all have in common.

We’ve looked at four key factors, ranking countries based on these:

Every country has taken its own approach to dealing with the novel coronavirus, from travel and movement restrictions to economic stimulus packages. These have had various degrees of success. Let’s look at four examples.

Home to just under nine million people and with a gross domestic product (GDP) of US$370.6 billion in 2018, Israel has responded well to the coronavirus crisis. Data scientist Dr Martin Zand has praised Israel for its response, which has been “right on target.” He comments:

“Social distancing, travel restrictions, the testing and the hospital preparedness, the national response has all been very good.”

Israel acted swiftly and decisively early on in the COVID-19 outbreak. The country had just 42 confirmed cases of the virus when it implemented strict, 14-day self-quarantine measures for all those arriving in the country.

Financially, Israel was slower to act, dragging its heels before eventually launching an “unprecedented” NIS 80 billion financial rescue plan. Equating to around 6% of GDP, Finance Minister Moshe Kahlon referred to the measures as, “the largest and widest in scope that the Israeli economy has ever seen.”

Germany is regularly held up as an example of a country where the COVID-19 fatality rate is lower than many other nations have experienced. It was swift to implement strict restrictions on travel and socializing for its 83 million citizens – far more so than many other countries.

In fiscal terms, Germany is fighting the coronavirus with an economic stimulus package worth €750 billion, taking on new debt for the first time in nearly a decade.

South Korea has reported one of the lowest COVID-19 fatality rates of any country. Interestingly, it didn’t opt for the huge lockdowns that have taken place in other countries, though it did close schools and imposed curfews in select cities.

Instead, the focus in South Korea was around using tech and information, with the government providing real-time information on infections and geographical hotspots to the country’s 51.64 million citizens.

Initially home to the largest outbreak outside of China, South Korea was quick to react in economic terms as well as in other ways. The US$1.619 trillion GDP economy saw a government stimulus package of 11.7 trillion won announced in early March, with Finance Minister Hong Nam-ki responding to the fact that, “the economy is in a state of emergency.”

Australia has focused on encouraging social distancing among its 24.99 million residents, while also increasing healthcare system capacity and isolating people with the virus and their close contacts. Travel restrictions have been imposed, both internationally and between states.

They say beauty lies in the beholder’s eyes. If you don’t fancy reading, here’s a little gem of a video for you instead.

Healthcare Responses to the Coronavirus Crisis

Countries that have focused heavily on widespread testing and contact tracing have fared particularly well. Having a strong public health system at the outset of the pandemic has also helped, of course.

In Israel, for example, the centralized health care system has been able to deliver a highly coordinated response to the pandemic. While the country has a “chronically starved health system,” according to Eyal Leshem, director of the Center for Travel Medicine and Tropical Diseases at Sheba Medical Center in Tel Hashomer, it was nonetheless swift to increase its intensive care bed numbers, buy ventilators and prepare medical professionals to respond to cases of COVD-19.

Germany, meanwhile, is known for its excellent healthcare system and huge network of laboratories across the country. It quickly implemented a massive testing programme, which has been seen as a key factor in the success of its coronavirus response.

Widespread testing has been a key component in the healthcare response of all those countries deemed to have handled the COVID-19 pandemic well. South Korea, for example, used text alerts and smartphone apps to share real-time information about testing and to perform contact tracing.

By informing the population about their local geographic conditions, in terms of case numbers and testing, the South Korean government delivered a highly focused informational campaign that engaged the public appropriately from a health standpoint.

In Israel, Benjamin Netanyahu has been a source of solid, sensible leadership throughout the coronavirus outbreak. The Times of Israel was quick to highlight the value of this, citing the importance of Netanyahu’s experience as, “a career official in a country used to dealing with crises, often through national effort.”

Then there’s the German example. Publications from Reuters to Forbes have also highlighted Chancellor Angela Merkel’s calm, collected approach to dealing with the crisis and her open, honest communication as helping Germany to navigate it. As the head of a country with a GDP of US$3.948 trillion, Chancellor Merkel is certainly used to making swift and sometimes tough decisions – experience which has served her well in dealing with the COVID-19 pandemic.

In South Korea, the key to success in flattening the coronavirus curve so rapidly was the country’s “well-funded and efficient system of delivering public services,” according to The Guardian. Cool and collected leadership from President Moon Jae-in also played a key role.

Meanwhile Australian Prime Minister Scott Morrison has been taking care of business not only at home, but also internationally. He has been a leading voice in urging G20 leaders to fund research into developing a coronavirus vaccine, as well as supporting trials of anti-viral drugs. Morrison has also emphasised the need to keep trade borders open for critical medical supplies – a common sense approach in the midst of a world in chaos.

No area of life has gone untouched by coronavirus, including cultural and religious events, from regular worship to periods of particular religious significance.

In Australia, lockdown measures included the suspension of religious gatherings, with people of all faiths working together to ensure that social distancing can be effective in slowing the spread of the virus. Church and cathedral services were cancelled, including mass, while daily prayers were cancelled at mosques. Even special events such as night prayers during Ramadan were cancelled in order to slow the spread of COVID-19.

“We’re taking a very strong stance, stronger than the government’s in terms of gatherings. We’re better safe than sorry.”

What Do All of These Countries Have in Common?

There are both striking similarities and stark differences in the way that these four countries – Israel, Germany, South Korea and Australia – have handled the coronavirus outbreak. Each has tackled freedom of movement and travel in a different way and lockdown measures have varied hugely, from an early, near-total lockdown in Germany, to an almost total absence of lockdown in South Korea.

So, what are the common threads?

Each of these countries was in a strong financial position to begin with. Indeed, three of the four (Germany, South Korea and Australia) are ranked in Investopedia’s list of the top 20 economies in the world. With money comes the power to act fast and this was certainly something that all four of these nations did.

The full financial impact of coronavirus on the global economy is yet to be felt, but the virus has already sent economic shockwaves around the world. Each of the countries we’ve cited as handling the COVID-19 outbreak well has been in a position to flow money freely into the healthcare system and to put in place comprehensive economic stimulus packages.

Israel, Germany, South Korea and Australia have all displayed calm, focused leadership during the crisis, with their respective leaders making tough decisions early on in the outbreak in order to protect their citizens. They have managed, in many ways, to overcome national political differences in order to lead the response to the novel coronavirus in their countries.

The honest and timely provision of information has been notable in all four cases, with leaders working in partnership with their populations in order to introduce and enforce the measures necessary for reducing the spread of the virus.

Early, widespread testing has been another clear commonality between the four countries that we have examined. World Health Organisation director general Tedros Adhanom Ghebreyesus made it clear that it was impossible to “fight a fire blindfolded” when he urged the world to “test, test, test.” That approach to testing was upheld in Israel, Germany, South Korea and Australia alike.

While other countries can’t do much to change their financial position, they can certainly learn from these examples of strong, empathetic leadership and from the benefits of mass testing and contact tracing. These are lessons that other countries around the world would do well to embrace as swiftly as possible, in order that every nation has a chance to do all it can to slow the pace of COVID-19.