Tomedes New 2013 Workflow Estimation Tool for Translators: How it Works 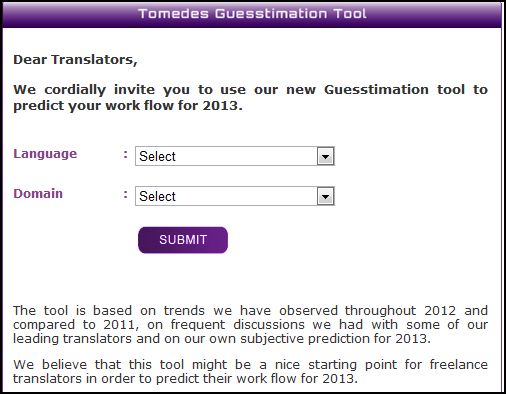 Translators, if you have not yet checked out our newly added workflow estimation tool for 2013, give it a whirl.  While we have said many times that the percentages calculated by our estimation tool cannot be relied upon as hard fact, it certainly helps to provide an idea of what to expect in 2013 as an overall workflow, compared to 2012.  As it contains most major language translation pairs and major industries, it is meant to be a guide for most translators, especially translators that work with Tomedes.

So how does the "Guesstimation" Tool work? And how can the data provided be used to help translators with projecting their 2013 workflow? This is best explained by using an example:

Now, of course most translators do not translate only one domain of translation all year.  Even if marketing translation or legal translation is what a particular translator specializes in, he or she still often takes on general translations or other types.  By estimating the percentage of translations a given translator dedicates to various industries, and using variations of the above equation, it is still possible to use the estimation tool to project workflow and/or income in a given year.  Let's look at a more complex example.

You can also use averages to figure out other estimates, if translations are divided up between several languages and sectors.

While the above equations are based upon estimated algorithmic figures calculated by our estimation tool, it is a useful guide for professional translators in order to prepare and plan ahead for 2013.  It provides a good idea of what to expect in workflow and/or income, which any translator can use to his or her benefit.